Start any day of the week with this delicious Granola. It takes about an hour to make and it is a wonderful topping on yogurt and fresh fruit or on its own. I added dried blueberries to the nuts and oats, after cooking, but you could just as well enjoy it plain. Make sure to use a large enough baking sheet to spread out Granola in an even layer. I added extra cinnamon, nutmeg and ginger to boost the flavor a bit. It stores well and will brighten up your morning. 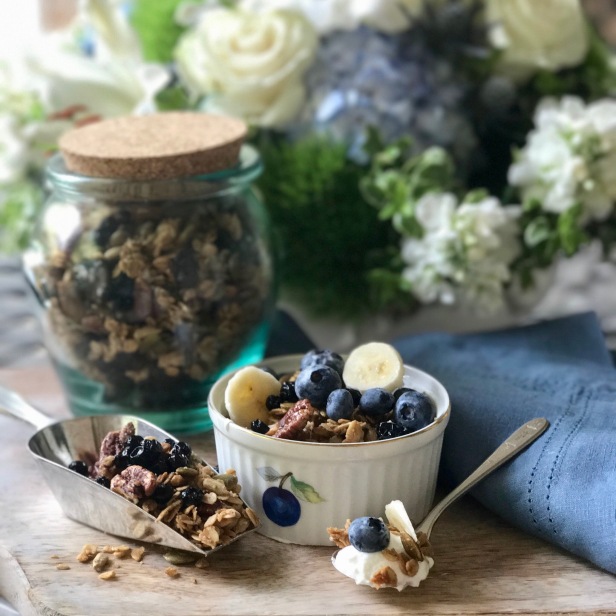 Click here for the recipe from New York Times.

Directions: Preheat oven to 350 (convection). In a small bowl, mix 1/4 cup of maple syrup with pecans. In a separate bowl, mix remaining ingredients (with the exception of blueberries) and remaining maple syrup in a bowl until incorporated. On large parchment-lined paper, spread Granola in an even layer. Bake in oven for about 20 minutes checking half way through, raking browning edges toward center to promote even cooking. At about 20 minutes, sprinkle maple pecans on top and bake for another 10 minutes until Granola is uniformly golden. Remove from oven and allow to cool completely. Once cooled break into chunks and add Dried Blueberries to Granola. Holds well in air-tight container for up to 2 weeks.